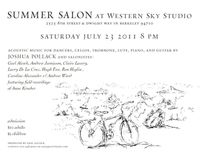 (All ages, $5-10 cover) I'll be sitting in with a cello ensemble performing an energetic new composition, "Qaam," by Joshua Pollack, featuring recordings of monkeys and dance by Caroline Alexander & Andrew Ward. Also on the program: performances by my cello sensei, Gael Alcock, as well as storytelling, mariachi music, a tiger dance, and improvisations on flute and trombone! Proceeds benefit CHA House, a program that brings students from Coalinga, Huron and Avenal to Berkeley each summer for college prep and provides support through the first year of college.